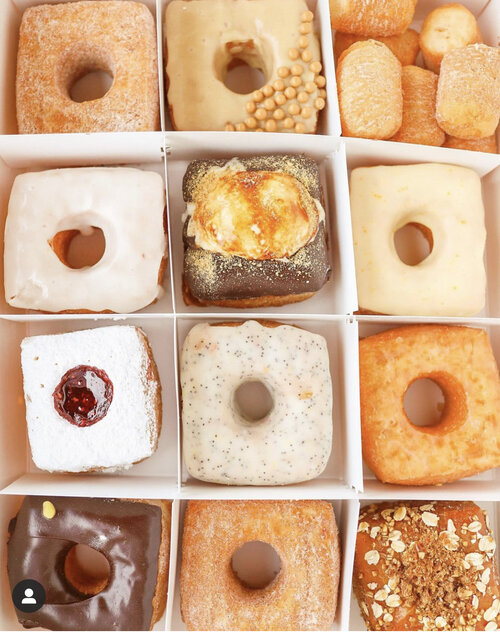 At NOLA Doughnuts, doughnuts are our passion. We simply create the best doughnuts in Portland every day.

NOLA Doughnuts is the story of a landscape architect, a nurse and an entrepreneur, who banded together and opened a doughnut shop. Siblings Robert Herkes and Connie DeMerell were close as children growing up in New Orleans, but their life experiences took them in different directions as adults. A landscape architect by day, Robert spent his evenings baking in his small Baton Rouge kitchen, perfecting his doughnut recipe in hopes of someday opening a bakery. Connie, meanwhile, was balancing her nursing career and raising a family in Portland, Oregon. In 2012, tragedy struck: within three months, Connie lost her husband and both Connie and Robert lost their mother. In the wake of these losses, Connie’s siblings relocated to help their sister. Robert didn’t give up on that recipe and was soon wowing Connie’s Portland friends with his flakey doughnuts. Before long, their friend Frank Halpin, an entrepreneur and doughnut lover, got on board to support their goal of opening a doughnut shop that reminded them of New Orleans. New Orleans is a city deeply rooted in food, family, and community, and these traditions are core values at NOLA Doughnuts. One of Connie and Rob’s fondest memories as children is feasting on po'boys and other traditional New Orleans dishes at Lama’s Seafood, a second-generation restaurant owned and operated by their Aunt Pam and Uncle Joe Lama, in New Orleans’ Ninth Ward. Family would come together, fill their bellies with humble dishes and feed their souls with love and support from those who gathered around the table. Robert and Connie channeled those memories when they opened NOLA Doughnuts in Lake Oswego in 2015, recreating a small piece of their family’s hometown and embracing their heritage.